When Peace Kills Politics: International Intervention and Unending Wars in the Sudans (Hardcover) 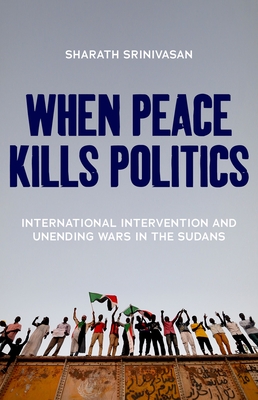 Why have war and coercion dominated the political realm in the Sudans, a decade after South Sudan's independence and fifteen years after the Comprehensive Peace Agreement? This book explains the tragic role of international peacemaking in reproducing violence and political authoritarianism in
Sudan and South Sudan. Sharath Srinivasan charts the destructive effects of Sudan's landmark north-south peace process, from how it fuelled war in Darfur, the Nuba Mountains and the Blue Nile to its contribution to Sudan's failed political transformation and South Sudan's rapid descent into civil war. Concluding with the
conspicuous absence of 'peace' when non-violent revolutionary political change came to Sudan in 2019, Srinivasan examines at close range why outsiders' peace projects may displace civil politics and raise the political currency of violence. This is an analysis of the perils of attempting to build a non-violent political realm through neat designs and tools of compulsion, where the end goal of peace becomes caught up in idealised constitutional texts, technocratic templates and deals on sharing spoils. When Peace Kills Politics shows
that these methods, ultimately anti-political, will be resisted--often violently--by dissatisfied local actors.

Sharath Srinivasan is David and Elaine Potter Lecturer at the Department of Politics and International Studies, University of Cambridge, where he is Co-Director of the Centre of Governance and Human Rights and a Fellow of King's College. He is also a Fellow of the Rift Valley Institute.