All The Names (Paperback) 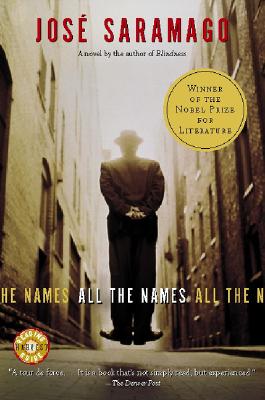 By José Saramago
$15.99
Email or call for price

WINNER OF THE NOBEL PRIZE FOR LITERATURE

José Saramago's mesmerizing, classic narrative about the loneliness of individual lives and the universal need for human connection.

Senhor José is a low-grade clerk in the city's Central Registry, where the living and the dead share the same shelf space. A middle-aged bachelor, he has no interest in anything beyond the certificates of birth, marriage, divorce, and death that are his daily routine. But one day, when he comes across the records of an anonymous young woman, something happens to him. Obsessed, Senhor José sets off to follow the thread that may lead him to the woman—but as he gets closer, he discovers more about her, and about himself, than he would ever have wished.The loneliness of people's lives, the effects of chance, the discovery of love—all coalesce in this extraordinary novel that displays the power and art of José Saramago in brilliant form.

JOSÉ SARAMAGO (1922–2010) was the author of many novels, among them Blindness, All the Names, Baltasar and Blimunda, and The Year of the Death of Ricardo Reis. In 1998 he was awarded the Nobel Prize for Literature.

Offers an unearthly, muted beauty; a freedom from the obvious, the ideological and trivial; an atmosphere of profound serenity, and a benevolent humor.-Literary Review

It is the marriage of the living and the dying...that so strongly characterizes the writing of José Saramago.-The New Statesman

The Swedish Academy's citation called his novels 'parables sustained by imagination, compassion and irony.' It is a description which perfectly captures his latest novel.-The Times (London)
—