On Being Different: What It Means to Be a Homosexual (Paperback) 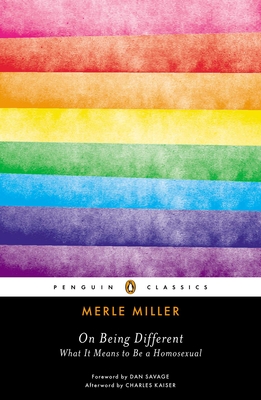 Originally published in 1971, Merle Miller’s On Being Different is a pioneering and thought-provoking book about being homosexual in the United States. Just two years after the Stonewall riots, Miller wrote a poignant essay for the New York Times Magazine entitled “What It Means To Be a Homosexual” in response to a homophobic article published in Harper’s Magazine. Described as “the most widely read and discussed essay of the decade,” it carried the seed that would blossom into On Being Different—one of the earliest memoirs to affirm the importance of coming out.

For more than sixty-five years, Penguin has been the leading publisher of classic literature in the English-speaking world. With more than 1,500 titles, Penguin Classics represents a global bookshelf of the best works throughout history and across genres and disciplines. Readers trust the series to provide authoritative texts enhanced by introductions and notes by distinguished scholars and contemporary authors, as well as up-to-date translations by award-winning translators.

Merle Miller (1919–1986) was an editor at Harper’s Magazine, Time, and the Nation, and was the bestselling author of several books, including the novel A Gay and Melancholy Sound and Plain Speaking, a biography of President Harry Truman.

Charles Kaiser is an author, journalist, and blogger. His books include 1968 in America and The Gay Metropolis, which was a New York Times Book Review Notable Book. He lives in New York City.

“Forty years later, the story Miller tells remains important and necessary to read, not only for both gay and straight readers to understand ‘the way it used to be,’ but because the issues Miller raised are still being discussed and argued about.” — Nancy Pearl

“Merle Miller’s On Being Different is a searing indictment of social hypocrisy, written with a quite but burning passion… This book is not only a valuable historical document about the gay civil rights movement, but it is an American classic because of the beauty it achieves through its unflinchingly honest portrayal of the raw pain of rejection.” — David Carter, author Stonewall: The Riots That Sparked the Gay Revolution

“Without indulging in sensationalism or special pleading but making it clear that he was writing directly from his own experience, [Miller] bridged the gap between the ‘straights’ and the ‘gays’ in a way that few recent writers on the subject have done. He also put himself on the line as a well-known writer, who was not afraid to publicly acknowledge his homosexuality.” — Publishers Weekly

“Brilliant, moving, and one is obliged to add, courageous narrative of personal homosexuality.” — James A. Wechsler, columnist