The Iliad: A New Translation by Caroline Alexander (Paperback) 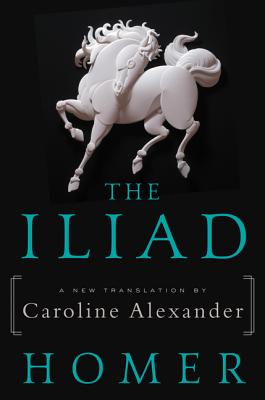 With her virtuoso translation, classicist and bestselling author Caroline Alexander brings to life Homer’s timeless epic of the Trojan War

Composed around 730 B.C., Homer’s Iliad recounts the events of a few momentous weeks in the protracted ten-year war between the invading Achaeans, or Greeks, and the Trojans in their besieged city of Ilion. From the explosive confrontation between Achilles, the greatest warrior at Troy, and Agamemnon, the inept leader of the Greeks, through to its tragic conclusion, The Iliad explores the abiding, blighting facts of war.

Soldier and civilian, victor and vanquished, hero and coward, men, women, young, old—The Iliad evokes in poignant, searing detail the fate of every life ravaged by the Trojan War. And, as told by Homer, this ancient tale of a particular Bronze Age conflict becomes a sublime and sweeping evocation of the destruction of war throughout the ages.

Carved close to the original Greek, acclaimed classicist Caroline Alexander’s new translation is swift and lean, with the driving cadence of its source—a translation epic in scale and yet devastating in its precision and power.

Although recognized as one of the greatest ancient Greek poets, the life and figure of Homer remains shrouded in mystery. Credited with the authorship of the epic poems Iliad and Odyssey, Homer, if he existed, is believed to have lived during the ninth century BC, and has been identified variously as a Babylonian, an Ithacan, or an Ionian. Regardless of his citizenship, Homer’s poems and speeches played a key role in shaping Greek culture, and Homeric studies remains one of the oldest continuous areas of scholarship, reaching from antiquity through to modern times.

Caroline Alexander is the author of the international bestsellers The Endurance and The Bounty and, more recently, The War That Killed Achilles: The True Story of the Trojan War. She is a contributing writer for National Geographic magazine and her work has also appeared in The New Yorker, Smithsonian, and Outside, among other publications. Alexander received her doctorate in classics from Columbia University and was the founder of the Department of Classics at the University of Malawi in East Africa.

“Alexander’s translation preserves the line numbers with the ancient Greek. Her style is simultaneously artificial and action-oriented. It reads like a performance…At times it feels like peering into the everyday rhythms and rituals of ancient Greece. The poetry itself sizzles on the page.” — New York Journal of Books

“[T]he guard has changed, and a new gold standard has appeared, a 2015 translation by Caroline Alexander.… [Alexander] is a grandmaster of restoration, delivering the Iliad unembellished, faithful to the Greek, and uniquely accessible. Her translation itself promises to be ageless and immortal.” — New Criterion

“Alexander’s translation comes across as translucent, readable and recitable, maintaining an epic poise and, by keeping a weather eye on the Greek word order, offering the occasional pleasing strangeness, while the varied line lengths ebb and flow with the tides of battle.” — The Spectator

“Alexander’s Iliad...preserves the strangeness of Homer in a way that almost every other translation over the past century has not…in an age where a new Iliad is produced every 18 months, this vitally different aspect of Alexander’s translation should be both celebrated and cherished.” — Argo

“True to the living word of the original Greek, Caroline Alexander’s new translation invites us to engage directly with this tradition. When I read her verses I can almost hear the music of Homeric performance.” — Gregory Nagy, Francis Jones Professor of Classical Greek Literature and professor of comparative literature, director of the Center for Hellenic Studies, Harvard University

“Caroline Alexander has done admirably in rendering the meaning of the Homeric text faithfully and in suitably dignified language. The format gives a genuine sense of reading a verse epic. Her line-numbers match the Greek, which will make this version convenient for use by college teachers and students.” — M.L. West, Emeritus Fellow of All Souls College, Oxford

“Caroline Alexander’s Iliad is miraculous . . . Its language conveys the precise meaning of the Greek in a sinewy yet propulsive style . . . In my judgment, this new translation is far superior to the familiar and admired work of Lattimore, Fitzgerald, and Fagles.” — G.W. Bowersock, Institute for Advanced Study, Princeton

“This powerful and readable version of the Iliad is modern without sacrificing the accuracy, energy, or the seriousness of the original.” — Library Journal

"Of the many new translations of Homer’s poem...perhaps the most highly readable is Caroline Alexander’s. Thought to be the first woman to have Englished the poem, Alexander embraces Matthew Arnold’s four essential Homeric qualities: rapidity, plainness of style, simplicity of ideas and nobility of manner, in lines that ebb and flow with the tide of battle. The book wears its learning lightly, the introduction pitching the Iliad as the ultimate anti-war poem." — Times Literary Supplement (London)