Between the Devil and Desire (Scoundrels of St. James #2) (Mass Market) 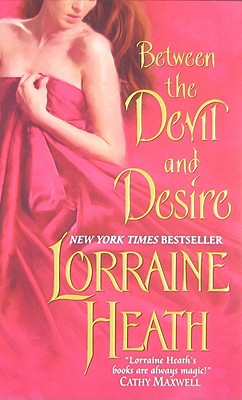 By Lorraine Heath
$6.99
Email or call for price

This is book number 2 in the Scoundrels of St. James series.

The ladies of the ton won't stop whispering about deliciously wicked Jack Dodger—once a thieving street urchin, now the wealthy owner of London's most exclusive gentleman's club. There's no pleasure he hasn't enjoyed, no debauchery the handsome scoundrel won't provide for the lords who flock to his house of carnal intrigue.

London's most virtuous lady—honorable, uncorrupted, and all too human

Olivia, Duchess of Lovingdon, would never associate with such a rogue. So when Jack is named sole heir to the duke's personal possessions, the beautiful, well-bred lady is outraged. Now, Olivia is forced to share her beloved home with this despicable man.

Caught between the devil and desire

But Olivia's icy disdain is no match for Jack's dangerous charm. His touch awakens desire. His kiss demands surrender. She will struggle to bar Jack from her heart . . . but her body, coveting divine release, will not let her bar him from her bed.

When multiple New York Times bestselling author Lorraine Heath received her BA degree in psychology from the University of Texas, she had no idea she had gained a foundation that would help her create believable characters—characters often described as “real people.” The daughter of a British beauty and a Texan stationed at RAF Bovingdon, Lorraine was born in England but soon after moved to Texas. Her dual nationality has given her a love for all things British and Texan, and she enjoys weaving both heritages through her stories.